L’Histoire… Changing names over the centuries

It is often said that Valletta is a city built by gentlemen for gentlemen but it appears that every gentleman who set foot on it wanted to leave his mark… by changing street names.

A recent issue of the international journal Rivista Italiana di Onomastica reported that, over four centuries, the city of Valletta was home to four flags, four languages and four changes in street names.

Melita Street, for example, was Britannia Street under the British, Rue de la Félicité Publique under the French, was known by the Maltese as Strada del Gran Falconiere but had been originally baptised by the Knights as Strada Pia, after Pope Pius V, who was a generous benefactor of the city.

Upon completion, Valletta streets were originally given Italian names but, when Napoleon invaded the island and Grand Master Ferdinand von Hompesch capitulated, these were substituted by French names. Two years later, the British came to the aid of the Maltese and took over the island. After 1927, as a language question statement, street names were changed to English. They are now in Maltese.

The article in the international journal was entitled ‘The street names of the city of Valletta’ and was penned by Italian language professor Joseph Brincat together with graduate Josianne Block and traces the history behind the street names. 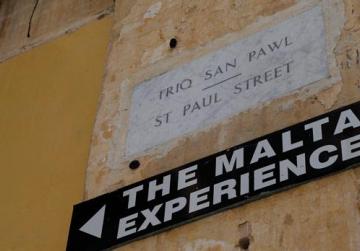 They highlight the fact that streets in Valletta are popularly referred to as ‘strade’ – Strada Rjali, Strada San Paolo, Strada Sant’Ursula.

This was inherited from the knights, thanks to Francesco Laparelli, Michaelangelo’s assistant on St Peter’s dome, who was sent to Malta by Pope Pius V to draw up plans for the Valletta fortifications.

“Laparelli always wrote about the ‘strade’ of Valletta and never ‘vie’,” the authors say. The term stuck and remained four language changes down, to this very day. People from Valletta would never say Old Bakery Street but would refer to it as Strada Forni; they would say Strada Mezzodì rather than South Street.­­ 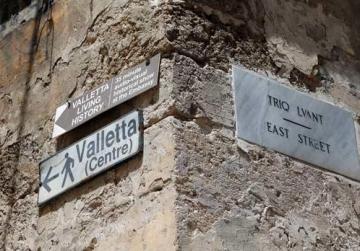 East Street and St Paul Street were both renamed Rue de la Constitution by the French.

In the 16th century, streets were mostly named after saints for whom the religious order had a special devotion, such as San Marco, San Simone, San Pietro, San Federico, San Pantaleone, or else after key locations in the city such as Strada del Palazzo, Di Monte, della Fontana, Della Fortuna, Di Sant’Elmo.

Republic Street started off as Strada San Giorgio but, over the centuries, its name changed according to political needs.

It was Rue Nationale under the French. When the British first came to the islands, they renamed it Strada Reale – originally they were not too bothered about scrapping Italian. However, a century on, when it became a sensitive political issue, they changed the name to Kingsway. Although, post-1974, it became Republic Street, most Maltese still refer to it as Strada Rjali.

St George’s Square, in front of the Grand Master’s palace, originally was Piazza San Giorgio but the name went full circle really. Under the French it was called Place de la Liberté and under the British it was Palace Square. But the Maltese people know it informally as the Main Guard, with reference to the neo-classical building in front of the palace where parades to inspect the guards took place.

Fresh from the revolution, the streets named after saints were swiftly erased to make way for civil names typical of the revolution ideology

Strada Stretta has kept its name till today. Over the centuries, all those who ruled over the island seemed to agree there was no better name for the straight and narrow street. For a little while, it was known as Strada Vanella but this was short-lived and its more straightforward name survived.

Strada San Federico became Strada Brutus, after the (back) stabber of the Roman emperor, Julius Caesar.

However, French street names did not have time to gain popularity seeing as the Maltese pushed the French out after two years and reinstated the Italian names.

During the British period, thanks to the improved relations between the Catholic Church and the governor, the saints were welcomed back to the city – in bilingual versions: Strada San Paolo was also St Paul Street.

The names were changed to Maltese after independence in 1964. Most were a mere translation from English. Some, however, did not survive. Britannia Street became Melita Street.

Duke of York Avenue – the road from Floriana leading to Castille – was renamed Girolamo Cassar, the man behind the building of the city.

In the city of gentlemen, patience is a virtue: Cassar had to wait four centuries before his contribution was recognised.