https://issuqtalbelt.com/
Description de leur site :
affectionately known as Is-Suq tal-Belt, has been transformed from a derelict structure into a state of the art destination,

Is-Suq tal-Belt could well return to the busy life it used to experience up to 35 years ago when whole families from all over the island congregated in the Valletta covered market to buy their daily needs.

Parliament has just approved the transfer of the building in Merchants Street to Arkadia Limited for 65 years. The company is planning to spend €7 million to redevelop the place by May 2017.

The lower floor will feature several stalls preparing and selling food and catering establishments will be concentrated on the ground floor. A multi-function floor, ranging from a cafeteria in the morning to a more cultural and entertainment based space later in the day, will go on the top floor. Very different to what it used to be when it all started. 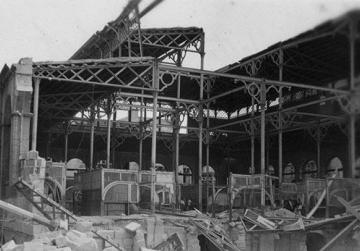 April 7, 1942: the Valletta market is hit and badly damaged during an air raid. Photo: National Archives of Malta

An 18th century description of Valletta states: “Near the Grand Master’s Palace is a large market-place where all manner of provisions are bought and sold by the country people, in great abundance: such as corn and other grain, fruits and greens of all sorts, wild and tame fowl, hogs, goats, oxen, sheep and other necessaries of life.”

This hub of market activity, then known as Piazza dell’Erba, was further supported by stalls set up along what we nowadays call Merchants Street. Several other makeshift stalls dotted a number of city thoroughfares: mainly today’s Republic Street, Archbishop Street, St Paul Street and Melita Street.

The place and the operations were regulated and the stall owners had to observe the conditions imposed by the government. A permit to operate was required and licence holders had to abide by the rules of the game, especially in view of the considerable demand for stall space in the open-market. 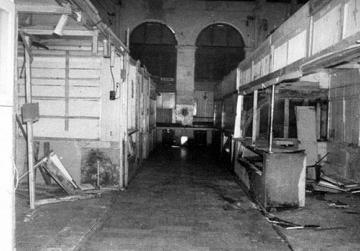 In 1845, a market was planned on the vacated site of the old Valletta jail in the area. However, nothing was done for a number of years until, in 1858, Governor John Gaspard Le Marchant decided it was time to act. Hector Zimelli, Superintendent of Public Works, was charged with the design.

Zimelli’s structure is architecturally significant because the place was the first in Malta to be constructed mostly out of prefabricated steel, in line with the structures consonant with the British industrial revolution.

Before concluding his designs, Zimelli was sent to Paris and London where he consulted with Victor Baltard, the architect of the new market Les Halles Centrales in Paris, and Sir Charles Fox, the engineer responsible for the building of the Crystal Palace. 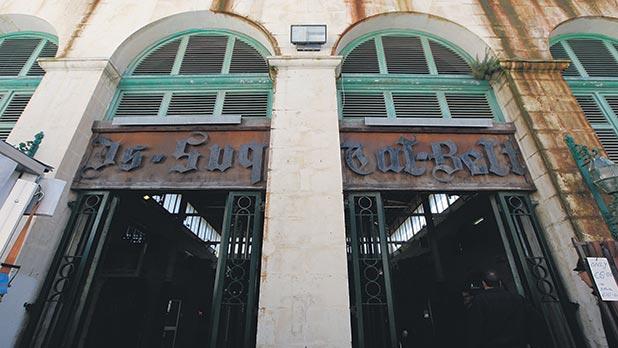 The market as it appears today. Photo: Darrin Zammit Lupi

In December 1858, the Secretary of State for the Colonies approved Governor Gaspard Le Merchant’s request for the allocation of funds to build the Valletta covered market. Work started in 1859 under the direction of Emanuele Luigi Galizia, chief architect at the Public Works Department, and were completed in 1861.

The market included 153 stalls, 65 cellars and a central skylight.

Known as Is-Suq tal-Belt, it would soon become the culinary hub of Malta. The smells and the sounds of the market lured shoppers from across the island.

At a time when the small village grocery would only to stock a limited selection of items, it was customary for families to buy their favourite foods from Is-Suq tal-Belt.

April 7, 1942, proved to be a red letter day. On the same day the Royal Opera House was hit during an air raid, the market also sustained severe damage.

Ten years later there was a proposal to rebuild the place but nothing happened. Periodic emergency repairs were carried out, particularly on the roof.

A major overhaul was undertaken in 1966, by which time the market no longer met modern hygiene standards. The place was revived and it was soon thriving, with fishmongers, butchers, vegetable sellers and groceries occupying its stalls until its closure in 1982.

A year later, the building was remodelled as a modern shopping arcade and rebranded Ixtri Malti (buy Maltese) to promote locally produced goods. Regrettably, the project failed and the market went into rapid decline. Although the food market returned to Valletta from Beltissebħ, in Floriana, in 1989 it never really reached its previous heights. 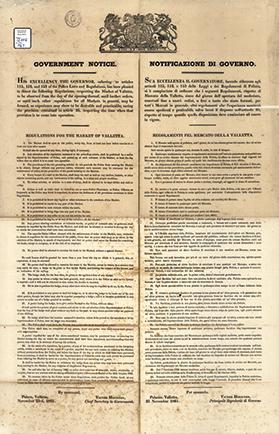 On November 23, 1861, following the inauguration of the new market in Valletta, the British Governor published new regulations.

The market would open daily from one hour before sunrise to one hour after sunset. If necessary, it would also open at night.

Throwing liquids in the corridor was prohibited. Dogs were banned. Smoking, cooking in the stalls and crying out to publicise items on sale were also not allowed.

Begging inside or at the en-trance was expressly forbidden.

Persons uttering ‘scandalous or indecent words’ were to be expelled and not allowed to enter the market on the following day.

Their personal badge, given to them by the police, had to be clearly visible. It was not transferable.

Porters disturbing good order would be expelled by the police.

Stalls had to be clean, and the cellars were frequently inspected by police physicians.

2018 – The completion of the huge renovation of Is-Suq tal Belt (Valletta Indoor Market) was one of the first big things to happen in Valletta this year; the beginning of a succession of events in celebration of Valletta’s year as European Capital of Culture. The traditional 19th century market had badly declined since the 1980s, but now, the gleaming overhauled food hall has been unveiled and is thriving with bustling life.

Before the very first market was built during the Order of St John, the square (named Piazza del Malcantone) was used as part of the gallows to parade guilty persons before being hanged in Floriana.

The first Valletta Market was completed in 1861, with 153 stalls plus 65 cellars, and flourished until it was bombed during WWII. Even though the damaged parts were repaired, the roof’s symmetry was lost, and in 1966, the market was overhauled. A few years later, two new floors were built and a pair of escalators were installed. The result was a prosperous market, ehich flourished until its decline in the mid-1970s.

In 1982, the food market was transferred to Floriana, and a year later, the Valletta Market was re-branded as a shopping arcade called Ixtri Malti (Buy Maltese). The relocation was highly unsuccessful, and despite moving back to Valletta in 1989, the food market continued to decline.

As part of the Valletta regeneration master plan following Valletta’s nomination for the European Capital of Culture 2018, Government issued restoration of the food market structure. The restoration included the dismantling of 1980s additions, while the original elements of the structure were preserved. With an art nouveau slant, the design of the Valletta Market was inspired by Covent Garden in London and Halles Centrales in Paris.

Now, the stalls within the building have been leased to a wide variety of catering establishments, offering visitors an immense choice of different food types, while a common area around a 360° bar allows for seating.